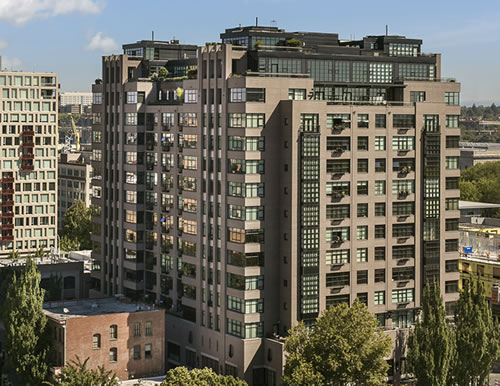 The Elizabeth is located in the heart of Portland’s Pearl District, which consistently appears on lists of the world’s most unique and trend-setting neighborhoods. The 15 story building, which was completed and ready for occupancy in 2005, consists of 182 residential condominium units, 8 street level commercial units, and three floors of secured parking for residents of the Elizabeth. The property was acquired and developed by John Carroll, an early visionary who believed that the former industrial warehouse properties and railroad yards of NW Portland could become thriving neighborhoods in support of Portland’s inevitable growth.  The Elizabeth’s distinctive architectural look was directed by Carroll, and crafted by local architects at Ankrom Moisan, whose design work was inspired by the portfolios of Charles Rennie Mackintosh, Mies van der Rohe and Frank Lloyd Wright.

The property offers 43 discrete floor plans that range in size from 725 to 3,375 square feet.

In addition to the sense of community established and fostered by the residents, one of the key advantages of the Elizabeth lies in its location. On a local level, the community is within easy walking distance of a wide range of art galleries, museums, theaters, city parks, indie and boutique retail stores, brew pubs, music and entertainment venues, clubs and restaurants that have become vibrant hallmarks of the Pearl District. The building is three short blocks from Powell’s City of Books, the world’s largest independent new and used bookstore and a must-see destination for many of Portland’s visitors. The Elizabeth is also a short stroll from the city’s riverfront walking and bike paths, Union Station, Providence Park (home of the MLS champion Portland Timbers), the Moda Center (home of the NBA Portland Trailblazers) and Pioneer Courthouse Square.  For those that are searching for wide-ranging outdoor activities, the Elizabeth is less than two miles from Forest Park, one of the country’s largest urban forest reserves that contains over 70 miles of recreational hiking trails, 78 miles from the word-class skiing and winter recreational facilities of Mt. Hood, and 76 miles from the beauty of the Oregon coast.